This tag is associated with 3 posts

Do what is required

That is what I am doing. Doing what is required for me. I struggle a lot with what that means and depending on the day it may mean that I need to be meditating more, working out more, working more, allowing myself some time off or to tell myself to stop thinking….about myself and to think more about others. And most of the time that is what is required. Think more about others.

That is why I get involved in my community and I do that in different ways. My community may be right around me or it may stretch much further. With the Internet and social media there are no boundaries. How I get involved goes from donating financially to different organizations, giving my time (I am president of De la rue aux étoiles 2015 for Dan la rue this year), or why I am writing this post, by riding my bike for two different organizations that are looking to find solutions to cancer. 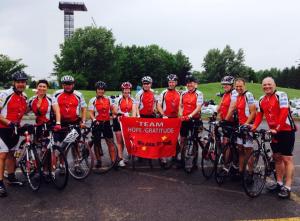 I will be doing two rides again this year to raise money for cancer research: The Enbridge Ride to Conquer Cancer to benefit the Jewish General Hospital and the Team Ian Ride to benefit the Princess Margaret Hospital. I am not sure that I need to explain why I am doing this. At least not after hearing a radio commercial from an insurance company I heard recently that started along the lines of:

Protect yourself in the case of a cancer diagnosis…..

Cancer has become such an insidious disease, so much a part of our daily lives. It is just there. Until it hits close to home and someone we know gets it, then that disease that seems to be everywhere becomes very real and not just cancer. The fear, the pain, the unknown become all too real and we do what we can to deal with it. What I do is I ride my bike to help raise money to help fund research. The research that these rides are funding is working. It is making inroads. It is making treatments easier and better and people are living longer.

I could go on but I think we know it all. In many cases we know too much. So I am simply asking you to donate to one of my rides and let’s continue to fund the research that will help us get closer to finding more solutions to cancer.

Let’s do what is required.

To donate to The Enbridge Ride to Conquer Cancer: CLICK HERE

To donate to The Team Ian Ride: CLICK HERE

Those are not my words. Those are the words of Ian Lawson Van Toch. He used to say that to challenge his friends. Ian was a student at Queen’s University in Kingston, Ontario who had just graduated with a Bachelor’s degree in Biomedical Computing. He was about to begin graduate studies in Medical Biophysics at the University of Toronto when he died tragically in 2007. Ian had been interning in the field of cancer research when he died of heart disease at 22. He had found his passion, to help find the cure for cancer.

I never knew Ian, but I met his father, John two years ago on a bike ride. As we rode along the bike path next to the river in Montreal, John told me about his son and the Ian Lawson Van Toch Cancer Informatics Fund that was established to continue his legacy. The Team Ian Ride, a cycling event from Kingston to Montreal that has raised over $130,000 so far, helps to support this fund. The ultimate goal of the fund is to provide opportunities for other young scientists like Ian to experience the same thrill of discovering their passion as Ian did and to help them launch their careers in the field of cancer informatics.

I had wanted to do the Team Ian Ride since I met John and he told me about it, but last year I had committed to the Enbridge Ride to Conquer Cancer and I was not sure I could raise the funds to do both. This year I was only planning to do the Enbridge Ride and I was asked again if I would like to participate in Ian’s Ride, I hesitated again and then said, “YES!”

I said yes because I realized that not doing it because I had to raise another $1000 was a lame excuse. I said yes because I saw the difference that our fundraising for Enbridge had made and that I could help to contribute to the $60,000 that Ian’s Ride is targeting this year. I said yes because I love to be with people who have a similar vision of life that I do; where there is nothing that is impossible and giving and caring are core values. I said yes because I was touched by the story of Ian and what that boy wanted to do and the passion that his family had to carry that dream on.

I met the rest of the family, Jane, Ian’s mother and Andrea, Ian’s sister, last weekend. The Team was out spinning on a street corner in front of one of the sponsors of the Team Ian Ride, the Royal Bank of Canada, where we collected donations. We asked and begged, we rode our bikes, we made bubbles for kids, we told the story of why we were doing this, we stopped passerby’s and people in cars stopped at red lights, we laughed and then at the end of it all I almost cried. Almost because there is great joy in what we are doing, but there is some sadness in this story. 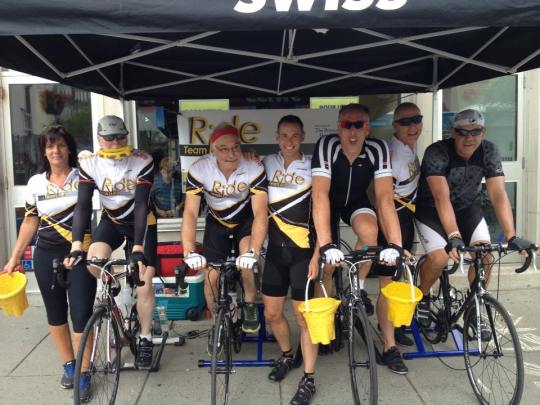 When I first met Jane, our conversation was more about passing off the donations and thanking her for an egg salad sandwich. Then at the end as we were packing up I stopped Jane and asked her how it was to do this, and did it help with her loss. As the crew around us cleaned up we talked and I thought I would hear about what it was to have lost her son but what I heard was the strength and hope she has found in what they are doing together as a family to raise money so that other kids may not only help in the search for a cure for cancer, but that they may find their passion in life as Ian had done. I heard what an outgoing and kind and caring kid Ian was but I also saw a determination in Jane to carry on his legacy, the same determination that I first heard from John when I met him.

I am honoured to be taking part in this ride with 27 others and a team of volunteers who understand not only why this is important but also what small grass roots organizations can do and how their generosity may affect change. It shows me that we need to be ready to be generous and caring in all that we do. It shows me once again, that when we have the opportunity to give, we will, and in giving there is hope for a better future.

The Ride to Conquer Cancer Montreal 2013: Come Ride With Me!

I am going on ride, a ride that is supposed to conquer cancer. Impossible?
I don’t know. The word impossible doesn’t exist in my vocabulary. All I know is that from July 6th to 7th in 2013 I will be riding from Montreal to Quebec City to raise money for cancer research and cancer care at the Segal Cancer Centre at the Jewish General Hospital in Montreal and throughout Quebec.

How did this happen and why am I doing this? Well the short answer is I saw a post on Facebook from my friend Rob Callard, who is a cancer survivor himself and has done two of these rides, saying that he was looking for people to join his team called Gratitude & Hope 2013 and participate in the Ride to Conquer Cancer, and I heard myself saying: “Hmmmm….”. Actually, that is exactly what I wrote in the comments section of his post. Then Rob and I spoke, I signed up, and here I am.

The long answer is that a friend of mine, a very dear special friend of mine, Sam Pelc, did this ride back in 2009. But Sam died of cancer in the fall of 2010 and somehow when I read Rob’s post I felt that I owed this to Sam and I just had to do it.

For you see, Sam taught me everything that I know about charity and more importantly about giving. We worked together on different charity events and projects and I learned many things from him, and here are a few:

1. Impossible doesn’t exist
2. There is no limit to what you can do
3. Don’t be shy to ask for help or donations
4. Allow people the opportunity to give, they want to, it is in our very human nature
5. It is our responsibility to give back to our family, our friends and to our community with no questions asked, and for nothing in return, including applause
6. Allow whatever you do in your everyday life to include giving back, for that is our true reason for being here on this earth

Sam made this ride because he had cancer and wanted to help others. Here is a link to the blog that he wrote before, during and after the ride: GOING FOR THE YELLOW JERSEY. There is much to be learned from what he wrote for all of us to better understand what it is to live with cancer and what that journey was all about for him.

This journey will be very different for me. I started my training by attending a spinning class at the YMCA last weekend and as I climbed on that bike and started to pedal I knew that the next six months were going to be a challenge to say the least.

There is a lot ahead. I have to get a bike. Yes, I am not a cyclist, more of a runner than a cyclist, but I am up for the challenge of those tiny seats and funny shoes. I have to get into some spandex that makes me less than excited especially at this time of year after one too many Christmas cookies. I have to train and get myself into shape and ready for this ride, which to me will be the easiest part and the part I am looking forward to the most. I have to reach out to those around me to ask for sponsorship to help me reach my goal. I have to raise $2,500 to be able to participate in the ride, but I have set my goal as $10,000. Why? I guess $2,500 just doesn’t seem like enough, it’s as simple as that. If I read through those six points above, then my goal should have even more zeroes, or no end to them at all.

And so here I go and I hope you will follow along, because I know I am going to need you there with me. Then again, I know that Sam will somehow be there too as my journey for the Yellow Jersey unfolds…..