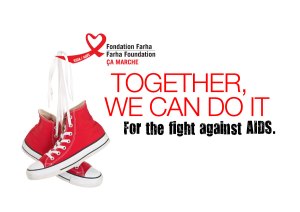 AIDS is a strange disease isn’t it? It descended on the world and took so many lives back in the eighties. Many of us watched as friends died a horrible and painful death. We did not stand by quietly. Some of us stood up and marched to fight for money for new drugs. Some of us stood up and fought to teach people about prevention and what could be done to stop the spread of AIDS. Some of us stood up to stop the discrimination that went with AIDS. And some of us stood up to help people living with AIDS. Ron Farha was one of those people. With the help of his family and those in the community he started the Farha Foundation to help people less fortunate than he was so that they could live out the end of their lives in as comfortable and humane a way as possible. He did whatever he could and did not stop until he had no choice and physically he could do no more. His short-term dream was to be able to help others; his long-term dream was of course to see the end of this horrible plague.

When Ron died, there were not the drugs and organizations to help people that there are today. AIDS was a death sentence. Period. It pushed people like Ron and his family, and many others to face things they did not want to face. It taught people about life as much as it taught people about death. It separated some families and it brought others closer together. Through the constant battles with governments, pharmaceutical companies, and with the help of the medical community, our society was able to change and grow to not only help the individual living with AIDS, but to build a structure and community of organizations that now deal with prevention and long term care. Ron’s dream to help has in many ways come true, but it does not mean we can stop the work that he started.

The war of AIDS is not over. If anything, the war is getting worse. Lest we forget is a phrase that comes from a war where hundreds of thousands died. Today we are fighting a different war, a war that has claimed over 20 million souls since 1981. Lest we forget why Ron started the Farha Foundation. Lest we forget that people are still becoming HIV+ every day. Lest we forget that this war is not over. If anything, the battlefield has only grown larger as the disease has spread across the world. Most important of all, lest we forget that we can make a difference.
Today, Sunday, September 18, 2011 is ÇA MARCHE, the AIDS walk in Montreal and it starts in a few hours in Parc Emlie-Gamelin. For any of you who knew Ron, I ask you to stop for a minute, just one minute at 10:30 when the walk starts and there is a moment of silence and remember him and all the others that have fought for this cause and for all those that have died from this disease. For any of you like me, who didn’t know Ron, take that same minute to be thankful for a man who has helped so many in our community, and again, remember those we have lost.

Then, let us all take another minute to take a step to do something in this fight against AIDS, for it is a fight that we have yet to win. Talk about this disease openly and honestly, protect yourselves always, and let Ron by your inspiration, as he has been mine, and do something to prevent this preventable disease. It is not too late to come and walk with us today.
For more information on the Foundation that Ron created or to make a donation, click here: Farha Foundation