This tag is associated with 2 posts

We did it Carl and I. We went out and took the photos for US versus THEM Friday morning for our group action in the INSIDE OUT Project.
We met for breakfast and stayed to have a few more cups of coffee so we didn’t have to leave. Didn’t have to start what we set out to do: take photos of the homeless.
But we did it. And it wasn’t photos of the homeless in the end. It was just photos of people. At least that was what we realized after we got going. We started with the owner of the diner where we had breakfast.

She was ready to be part of this project. It made it easier. It let Carl figure out how he wanted to take the shots. And we got in the car and we headed out.

As we drove down Ste. Catherine street in Montreal we were on the look out for homeless people.
“He looks like one!”
“Where?”
“There – in front of the grocery store!”
We parked and got out. I carried the camera bag with the extra batteries and lenses. Something to hold, make me feel part of the experience. But I was the talker and I had to get my elevator speech down for what I was going to say.
By the time we got to the corner where I had seen the guy, he was gone. Carl took a few shots of me.
A girl walked by.
“Excuse me….we are taking photos for a project called INSIDE OUT. Have you heard of it? No? Well it was started by this guy in Paris and…..well, we are taking photos to show people that there is no difference between us and the homeless and I wondered if we could take your photo?”
“I am not homeless.”
“I know but….sure, sure….I understand. Thanks anyway.”

We get back in the car and kept going. We saw more homeless people and we parked.
I don’t have my words. I don’t understand what this is all about I realize. Not really. I thought I did, but I don’t.
We see a young guy sitting on the sidewalk with his dog.
“Hey bud, what’s up?” I say as I crouch down next to him and stick out my hand. My name is Simon, this is Carl.”
“Sebastien,” he says with a smile.
“We are taking photos of people for a project called INSIDE OUT. It was started by this guy in Paris name JR. We are going to take photos, send them off to them. They will blow them up into black and white photos that we can put up outside somewhere. They may end up on the net, in my blog, you cool with that? Can we take your photo? Just your face.”
We had the release forms in our bag.
“Sure man. Why not?”

And so we started. We walked west on Ste. Catherine and we asked people to take their photos. I got my speech down.
“Hey bud, my name is Simon, this is Carl. We are taking photos, photos of all kinds of people here in Montreal between 9:30 and 12. The name of the project is INSIDE OUT, started in Paris by a guy named JR. We want to take a photo of your face, just your face. We will send all the photos to INSIDE OUT and they will send us back big posters that we will put up somewhere for a few days. We don’t know where yet. The idea behind this is that we are all the same. Our project is called US versus THEM, comment vois-tu le monde? How do you see the world? It’s all about our attitude. Can we take your photo?”
The responses were different and the same. The people living on the street said, “Sure, no problem. Cool idea. “ They heard what we were saying. They listened. They were right there with us. Present.
Those walking down the street were afraid, distrustful: “If I knew you maybe I would.”
Then we got lucky and a few people did say yes.
Half of the photos we took are of people that live on the street. Half are of people that don’t. If you notice, I am not writing “homeless” anymore. These people aren’t homeless; they are just people. Attitude matters for me too I learned.

We continued on. We were moved by what we saw in these people’s eyes and we were excited that we were doing what we had set out to do. We were touched by all those that said yes, we had to be.

Then we continued east to Emilie-Gamelin park and the world changed.
We parked the car and asked the first guy sitting on the steps of the bus station, “Hey bud….”
We looked into his eyes and the ‘no’ did not surprise us. The pain we saw only hurt us.
We crossed the street to the park and that excitement changed back to fear and then panic as we looked across the grass and saw groups of twos and threes with their sleeping bags. I took a deep breath and said, “Let’s go, let’s do it.”
We went up to the first two guys and I explained what we were doing. “I think I have seen you around,” Neuron said to me. That was his name he said: Neuron. I watched as he tried to tie a scarf around his wrist, his friend looking on to see what we were all about. “Can we take your photo?”
“Why me?”
I could only tell him the truth, “You were the first one in the park.”
Neuron was not in great shape. Neither was his friend. Neither were any of the people living in that park. Neuron didn’t say yes, he couldn’t have his photo out there like that. We kept going.
Carl and I walked around the park and we didn’t say too much to each other. We just walked and took it all in and we found it hard to breathe.
“I don’t think we can do this here,” I said. 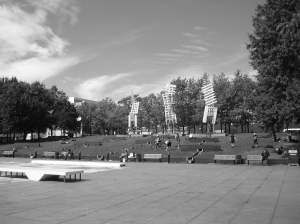 Why was this place different?
Was it because there were so many people all living here together? I think “hurting” together would be a better way of putting it.
We stopped in front of an old man and Carl started talking to him.
“How is your day going?”
I have to stop here. I had to stop there too. I had sat down next to Chamberland on the bench and reached out to shake his hand.
“Not too good,” he said.
We didn’t explain what we were doing at first, about the project, about INSIDE OUT. It didn’t matter. Not to him. At that point I don’t think either of us thought this project really mattered to anyone.
I said, “Can we take your photo?”
“Sure, no problem.”
Carl took his photo and I turned away and looked up at the sky. If you are ever in a situation where you are going to cry, raise your eyes up to the sky and it helps to stop the tears.
I went back and gave him a couple of bucks. He hadn’t asked for it. He thanked me and smiled. Not one of the people we took a photo of asked for money. Not once.
We continued to walk through the park. The air was gone in the park for us. We walked by a series of benches. Each one filled with groups of people. Some of them were talking, some of them were just sitting. The last guy lying there, asleep, was wet from pissing himself.
“I can’t do this anymore.”
“Me neither.”
We got back in the car.
We didn’t say much on the ride back.
We drove back to Carl’s office to download the photos and I could only say to myself, “Why me?”

For more information on the INSIDE OUT Project, click here.
If you would like to know when US versus THEM will be up in Montreal, please sign up for The Social Effect Newsletter: Sign up.

This morning I am off to the streets with my friend Carl. We are off to take photos for INSIDE OUT. What is INSIDE OUT?
INSIDE OUT is a large-scale participatory art project that transforms messages of personal identity into pieces of artistic work. Upload a portrait. Receive a poster. Paste it for the world to see.
Watch this video and then you will get it. That’s what happened to me. That is why I am hitting the streets this morning. (The video is 24 minutes so find the time and take the time.)

It seems really simple to do this. You go to the site for INSIDE OUT, come up with a group name, a statement and a tag.
So here is ours:

Group name: US versus THEM
Statement: Comment vois-tu le monde? (How do you see the world?)
Tag: ATTITUDE

Our idea is to show that there is no difference between the homeless and the rest of us; only our circumstances are different and that inside of us we are all the same. It is really our attitude that makes the difference in how we look at the world and each other.

Cool right? It is not feeling so cool this morning. Carl and I are meeting for breakfast at 8:30 and then hitting the streets to ask people that live on the streets if we can take their photos. Then we are going to ask people like you if we can take yours. Then one day soon you will see your photo next to a homeless persons and people will hopefully ask……? Actually, what will people ask?

The idea was that in laying the photos up side by side we would not know who was living on the street and who wasn’t. Make us wonder who is the “US” and who is the “THEM”.
All I know is right now I am not looking forward to asking anybody to take their photo because I think I am the who is creating the division of “US” versus “THEM” by taking “THEIR” photo.
Let’s see what this morning teaches us.

For more information on INSIDE OUT, click here.
If you would like to participate and have your photo taken, please contact me at simon@thesocialeffect.ca. (You must live in Montreal to participate.)