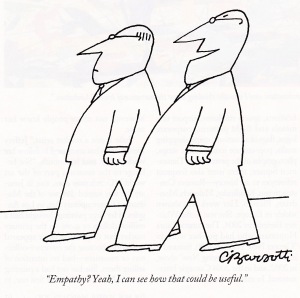 We hear a lot about empathy these days as if it is the driving force to help others. But is it? The word empathy was only created somewhere around 1905. Does that mean that we didn’t have empathy before that? Was there not the need for it? Is empathy something that became necessary after the Industrial Revolution and the world that developed from it at the turn of the century? Why the need then to create that word?

Empathy is about spontaneously and naturally tuning into the other person’s thoughts and feelings, whatever these might be […]There are two major elements to empathy. The first is the cognitive component: Understanding the others feelings and the ability to take their perspective […] the second element to empathy is the affective component. This is an observer’s appropriate emotional response to another person’s emotional state. ~ Simon Baron-Cohen

I would argue that empathy is not enough or not even natural. Is that our driving force? Are we not out for ourselves first? Must we not be taught and learn how to give and to share? Or have I got it all wrong and that innately we are empathetic? But that is not what I see today. I see entitlement as the buzzword of this generation where it is I first and everyone else second? With all due respect to the late Steve Jobs, where is the empathy in IPhone, IPad, or IPod – it looks like we are all being taught that it is all about me me me.

Nobody is against empathy. Nonetheless, it’s insufficient. These days empathy has become a shortcut. It has become a way to experience delicious moral emotions without confronting the weaknesses in our nature that prevent us from actually acting upon them. It has become a way to experience the illusion of moral progress without having to do the nasty work of making moral judgments. In a culture that is inarticulate about moral categories and touchy about giving offense, teaching empathy is a safe way for schools and other institutions to seem virtuous without risking controversy or hurting anybody’s feelings. ~ The Limits of Empathy by David Brooks

Empathy is not enough. We must look beyond to something that we are usually far too afraid to affront, that which is deep within us. It is our fear that we cannot that must be tackled to allow ourselves to help others. Who needs empathy if we would simply learn to put ourselves second instead of always first?

I was born in Winnipeg, moved to Montreal to study economics at McGill University and then studied fashion design in Paris. I worked in the fashion business for 20 years until I gave it all up to find the answers to life. I learned of course that there are no answers and so I decided to do what I always wanted to do and open a little shop. The shop is called Etiket and we sell the best beauty products and perfume available and a candle or two. I continue on my journey and I will see where it will take me. Part of the journey has always been writing, creating and giving. "Your soul doesn't care what you do for a living - and when your life is over, neither will you. Your soul cares only about what you are being while you are doing whatever you are doing." Neale Donald Walsch
View all posts by Simon Tooley »
« I Dare You
Renewal »