I went to New York this past weekend for work and for fun. In the back of my mind I kept hearing a nagging voice:
Occupy Wall Street – are you going to check it out or not “Mr. Each One of Us Can Make a Difference
Sunday was a beautiful morning and I headed downtown. First stop was going to be to see Ground Zero and second stop: Occupy Wall Street. No need to mention the appropriateness of the two side by side. That is the whole point of where the occupation is. I never got to see Ground Zero, I didn’t have photo ID with me, but I did get to see Occupy Wall Street, actually I got to smell it as well. 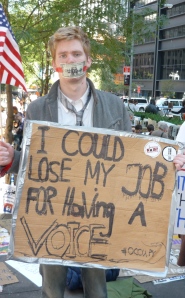 There in Zuccotti Park in Lower Manhattan were I don’t know how many people sitting, talking, making posters, eating, doing what you do when you live in a park protesting against the divide between the have’s and the have not’s. I am not going to explain the movement, you can Google Occupy Wall Street and you will have more links than you will be able to read or watch. This is just about what I saw on Sunday when I sat down with a few of the protesters to do my best to understand this.
Hey, my name is Simon, I am from Montreal and I have a blog called The Social Effect which is all about the idea that each one of us can make change in our world if we want to….and I guess this what you are doing here. Mind if I ask you a few questions about what this is all about and why you are here?
I usually added in, I am an old guy from…. as to most of these kids, I am sure that is what I was. And that is part of what this is all about. But I am getting ahead of myself. Each person I spoke to talked to me about the obvious reason that all the protesters were there, the financial chaos that they see affecting the world and the need for regulation to stop this. But there is more to it than that. Much more.
The first person I spoke to was Trista, she is 23 years old and came up from West Virginia and had been there for three days. She knew the ideology behind the movement and was certainly the right person to speak to first. Here are her thoughts:
This is a movement for occupation, an opportunity to rebuild and to fight against the enemy. Who is the enemy? Those trying to oppress. We are fighting for a better world, for the essence of what it is to be human, to reconstruct.
I asked her if she was afraid of anything.
Fear is optional. This is an opportunity. 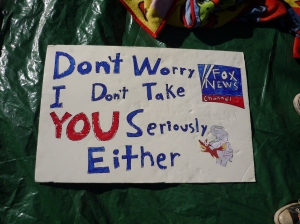 She was a little intense for me and I did feel like she was trying to indoctrinate me and perhaps herself in everything she was saying, but in any grass roots campaign must there not be the zealots who believe, who fire up the others, who keep the message clear and protected? That was Trista.
I made my way along and sat down next with Brendan, who is 20 years old and he had been there for five days, he studies history in Connecticut.
Money is buying the politicians. There is no true voice because they have been bought and paid for and the one with the biggest purse behind them always wins.
He spoke to me about poverty and about not wanting to live in a country that based itself on money alone. He was heading back home that day.
Next I sat down with Collette, who is 37 and from the Lower East Side. She was surrounded by a group who seemed not too impressed with me, but once we started to talk they opened up. Collette was quick to point out that she has a job and lived near there but believed in the cause. She hadn’t slept there every night but she was there as much as she could be when she wasn’t working. For her this wasn’t about the 99% versus the 1% this was how the two could unite. She had seen a big change since Giuliani had been in power.
We don’t talk to each other anymore. The dividing line between rich and poor is so great that we don’t care anymore about just being people. I stop now when I see garbage on the street and pick it up. I talk to people. This really is about feeling part of something, about not being alone. 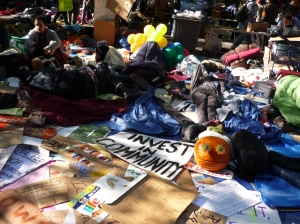 I got that. I started to feel like I was getting more and more of what this is all about.
Next I sat down with David, 23 years old and from California and had spent one night there. He hadn’t known anything about this but his Mom had told him about it and he and his friends were doing a tour of the country and thought it would be cool to check it out. They all had matching red, white and blue velour track suits on and I wasn’t sure if their hair was real or they were wearing afro wigs from the 70’s.
There is no unified message here. We need higher taxes for the rich and more regulation on the financial side.
He didn’t know quite what to say after that. I wasn’t sure if he really knew why he was there or it seemed like something to be able to say he had done on his trip.
Then I saw a group all wearing blue t-shirts that had “Blue Crew” written across them. I sat down with Sean, 20 years old who was studying sociology from Cincinnati. Sean talked to me about job loss and foreclosures, about the poverty in Appalachia.
Whoever has the money wins. We need to touch hearts, to make change. This is about greed. But no one is really able to articulate the movement.

I know what I heard as I talked to each one of those protesters, I heard myself back in college thirty years ago. I heard myself saying:
I would never be like ‘them’. I would be different. The world was wrong. It wasn’t fair. It shouldn’t be like that. It doesn’t have to be like that. I would make it different.
But I didn’t. I finished college and got a job and bought in to everything I said I wouldn’t. I gave up. I forgot what I believed in.
That’s what these protesters are doing, fighting for what they believe in.
Is this a revolution?
Maybe.
It is certainly a voice that is getting stronger and stronger and spreading as I write this.
This is an opportunity for all of us to make change.
What if we didn’t make fear an option and chose change instead?
It is your choice, and in many ways I think that is what this movement wants to give us, a choice.
So what’s yours?

I was born in Winnipeg, moved to Montreal to study economics at McGill University and then studied fashion design in Paris. I worked in the fashion business for 20 years until I gave it all up to find the answers to life. I learned of course that there are no answers and so I decided to do what I always wanted to do and open a little shop. The shop is called Etiket and we sell the best beauty products and perfume available and a candle or two. I continue on my journey and I will see where it will take me. Part of the journey has always been writing, creating and giving. "Your soul doesn't care what you do for a living - and when your life is over, neither will you. Your soul cares only about what you are being while you are doing whatever you are doing." Neale Donald Walsch
View all posts by Simon Tooley »
« What would you do if you weren’t afraid?
Send in Your Knickers! The Bra Bank Appeal »